What to drink with pan-seared ham steaks and glazed pears 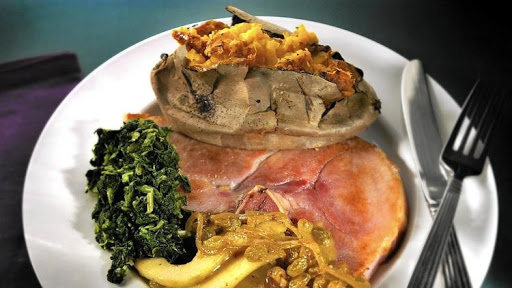 Cut 2 ham steaks in half. Heat 1 tablespoon vegetable oil in a skillet over high heat. Cook the ham until golden brown on each side, about 2 minutes per side. Remove ham from pan. Add 1 sliced onion to skillet; cook until translucent, about 3 minutes. Add 2 cloves minced garlic; cook, 1 minute. Add 1/4 cup sherry and 1/2 cup chicken broth; cook until reduced by half, about 4 minutes. Add 2 sliced pears and 1/2 cup golden raisins; cook 2 minutes. Remove from heat. Stir in 1/2 stick unsalted butter; add black pepper to taste. Serve pear-raisin-onion mixture over the ham. Makes: 4 servings

2012 DeMorgenzon Chenin Blanc, Stellenbosch, South Africa: This wine will help strike the perfect balance between the sweet and salty aspects of the dish.A textbook chenin blanc, this wine is dry and crisp, with aromas of white flower and orange blossom.On the palate it has flavors of ripe pear and yellow apple, with just a touch of honey and spice. Those components will all come together to enhance the complexity of this dish.$35

2013 EnRoute Winery Les Pommiers Pinot Noir, Russian River Valley, California: There's nothing better than a good pork and pinot pairing. From vines planted on the famous Goldridge soils of a repurposed apple orchard in the Russian River Valley, Les Pommiers is intensely aromatic and deeply concentrated. Featuring unwavering amounts of candied red cherry, silky tannins and afterthoughts of pie spice and vanilla, this beauty from Sonoma will deliver the richness the dish craves.$65

2011 Overland Kick Ranch Petite Sirah, Sonoma, California: This entree doesn't require an overtly big wine, but for those who like full-bodied reds, this one's for you.With an alcohol level that climbs past 15 percent, this single vineyard blockbuster is remarkably balanced, with notes of cocoa, nutmeg and crushed rock melting into blueberries and surprisingly soft tannins.Its symmetry, most likely brought about by maturation in neutral French oak, will make it a terrific accompaniment to the dish. $36